Anamnesis (after Tōru Takemitsu) for cello and guitar by Marek Pasieczny

I love this piece because it uses the resonance of both the cello and guitar to create a really special soundworld, I suppose since it’s inspired by Takemitsu. I find it really quite haunting and sad. I’ve performed it many times with my friend Mark Reid on guitar, and we find we always want to programme it because of how well it balances the two instruments and blends their sound qualities.

Anamnesis means ‘the ability to recall past events; recollection’, so listen out for how you keep hearing things again and again in different contexts thoughout the piece. Notice how there are a lot of echoes too – the same pitch may be heard in one instrument and then picked up and continued on by the other. I remember enjoying this a lot the first time I heard it – it’s quite relaxing and dreamy. As the piece isn’t really rigidly structured (it’s more kind of worked out in ratios of how often different motifs are heard as the piece progresses), you can kind of let it wash over you. You might want to turn the lights off and lie down on a couch or something for the full experience! 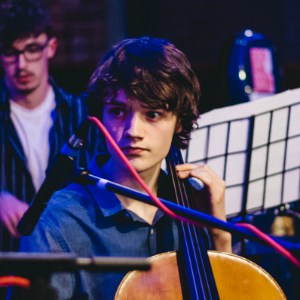 Malcolm Goodare is a cellist and teacher, now based in Stirling, who was a part of No Dice from 2015-2019 and played many of the new works written for the ensemble during that time. He takes a particular interest in playing new chamber music. He occasionally composes, often in collaboration with others and with influences from the Scottish traditional music scene. He has recently taken an interest in songwriting and what can be done with cello and voice.

What piece have you chosen? Stay On It by Julius Eastman.   What’s special about this piece for you? As

This song was introduced to me by my music teacher in Ysgol Tryfan, my secondary school. I was a member