If I’ve spoken to you about my composition, it should come as no surprise that I’ve chosen a piece by Sciarrino! The first piece I heard of his was Introduzione all’Oscuro and I’ve been a little obsessed ever since. Sciarrino’s music often evokes the sounds of the body – heartbeats, breathing – and it evokes a very visceral and physical reaction in me. For me personally, it was also what got me to reconsider what ‘extended techniques’ can be capable of, and it has very much influenced my instrumental writing. Instead of just ‘funny noises’, I find that in Sciarrino’s music extended techniques can actually achieve something that is meaningful! When I heard Allegoria della Notte live in Birmingham in 2017, it was one of the most impactful performances of anything I’ve heard.

The piece starts and ends with quotations from Mendelssohn’s Violin Concerto, with what seems like long periods of very static and very quiet material in between. For me, knowing that the Mendelssohn only comes back at the very end of the piece creates an exquisite tension for the entire duration of the piece. Tension also comes from the static material; when your ear gets used to a prolonged static sound that hovers around the edge of audibility, when it suddenly stops or there’s sudden a loud sound, it can feel like a tectonic shift.
While I said that ‘extended techniques’ in Sciarrino’s music is more than just ‘funny noises’, it’s also hard not to marvel at the kinds of sounds he manages to draw out from an orchestra. With fluttering harmonics and strange breath sounds, Sciarrino’s palette, or maybe more importantly the way he uses them, is unlike anything else I’ve heard. 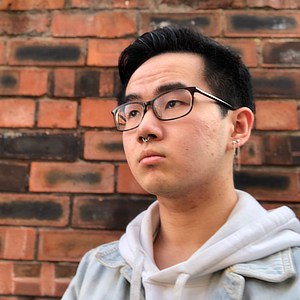 James Chan (1997-) is a Hong Kong-born composer currently based in Manchester. Since 2016 he has been studying on the prestigious ‘joint-course’ at the Royal Northern College of Music, under Gary Carpenter, and the University of Manchester.

His music often inhabits a delicate and fragile sound world, and is much inspired by other art forms. He is drawn to a diverse range of artists, from Agnes Martin to Francis Bacon. He also has a particular penchant for the writings of Virginia Woolf and Ted Hughes.

In 2016 he was announced as a winner in the senior category of the BBC Inspire Young Composer’s Competition and was commissioned to write a piece for the NYCGB Fellows; the piece speaking has since been recorded. More recently, he was chosen to be part of the London Symphony Orchestra Panufnik Scheme 2019.

Given the instability of this year, I’ve increasingly found myself being drawn to music that feels grounding. I can get

What piece have you chosen? Drawings for Meyoko by Angélica Negrón.   What’s special about this piece for you? I