I first encountered Michel van der Aa’s work in 2013 with his opera Sunken Garden, and, having spent much of the following few years thinking about it, travelled to Hannover in my gap year to see his next opera Blank Out. I’ve always been excited by work that incorporates elements beyond the sonic, and I often find myself thinking about how we perceive hierarchy between the different elements in this type of work. Up-close gives a fantastic example of a piece where the video sits within it, as a vital part of the complete ensemble. I won’t give too much away, but I see the video as suggesting a portal to a parallel world, reflecting a strange alternate reality. The uncanny mirroring in the video world of the ‘real’ challenges the framing of the piece, and makes the viewer question their presuppositions about its constituent parts.

There’s a level of control that I think van der Aa manages very carefully and effectively. Watching it I feel like I’m being guided through a very strange space that, perhaps being so close to it, can’t be understood. It’s just lovely to spend half an hour being taken on a weird journey.

Throughout this piece I love the sense of different distances (perhaps implied somewhat by the title). There is continuous shifting in focus. That, for me, is one of the most exciting things about this piece – it’s an ever-changing sense of tension that shifts with the changing relationships between the real and the video, the acoustic and the electronic. The whole opening is just solo cello—it’s a lovely way of building a sense of expectation as the material gradually widens and we are constantly aware of all the other performers poised in anticipation behind the soloist. It’s such an amazing moment when the solo cello stops and is taken over by all the other sounds and we’re released into a totally different space. 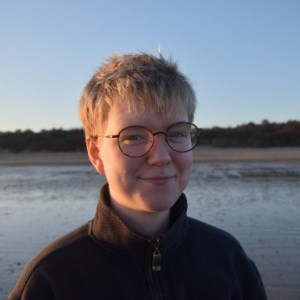 Fraz Ireland is one of the most contemporary composers around today. They are based in Manchester and study composition on the prestigious Joint Course at RNCM and the University of Manchester. Their teachers have included Emily Howard, Larry Goves, Helen Grime and Anna Meredith. Fraz’s work often incorporates text and video elements and sometimes lurks in the corridors between liminal spaces. Their work has been performed by groups including NYOGB, the Tallis Scholars, No Dice Collective, Manchester Contemporary Youth Opera, Discord/Datcord, and at venues including Wigmore Hall, the Royal Albert Hall, Birmingham Symphony Hall, the Tate Britain, Manchester Cathedral, and broadcast on BBC radio 3. In 2016, Fraz won the Royal Philharmonic Society’s inaugural award for young composers and was the apprentice composer-in-residence at the Wigmore Hall. Fraz is a Britten-Pears young artist 2020.

Given the instability of this year, I’ve increasingly found myself being drawn to music that feels grounding. I can get

What piece have you chosen? Allegoria della Notte by Salvatore Sciarrino   What’s special about this piece for you? If